LBC Capital acquires Northpoint Commercial Finance, which is among the leading US and Canadian inventory finance lenders, resulting in an attractive end-to-end equipment finance platform which broadens our Canadian offering and create a US presence, an important customer attribute for manufacturers and dealers looking for a single North American point of service. Also, Laurentian Bank announces the creation of a new technology subsidiary, LBC Tech, bringing together all IT teams under one entity.

Laurentian Bank posts record results for a ninth consecutive year, with all of its principal activity sectors generating solid growth and its profitability objectives being achieved. For its part, B2B Bank sees the volume of its mortgage and business loan portfolios increase by 34% and 18% respectively. The organization launches its seven-year transformation plan with clear objectives to accomplish by 2022: achieve a return on equity that is comparable to the Canadian banking industry, double the size of our organization and, build a solid strategic foundation.

Laurentian Bank posts record results for an eighth consecutive year, with activities conducted outside Québec accounting for 50% of the organization’s profitability. The integration of MRS Companies and AGF Trust is completed, thereby doubling the size of B2B Bank and reinforcing its leadership position within its market. The Bank launches two new and very promising product lines during the course of the year — equipment financing products intended primarily for small and medium-sized enterprises, and alternative mortgage solutions offered to mortgage brokers by B2B Bank.

Laurentian Bank posts record results for a seventh consecutive year and surpasses the $150 million mark in adjusted net income for the first time in its history. The Bank also pursues the integration of MRS Companies and AGF Trust, and it introduces new financing solutions for businesses. The institution’s dividend on common shares reaches $1.98, up by 52% over five years.

B2B Trust becomes federally chartered B2B Bank to better reflect the nature of its loan and deposit activities. Laurentian Bank proceeds with the acquisition of AGF Trust, which consolidates B2B Bank’s positioning as leading provider of products and services to independent financial advisors across Canada. In order to reinforce its capitalization, Laurentian Bank goes ahead with capital issues in the order of $482 million, and its total assets surpass the $35 billion mark.

The Bank proceeds with the acquisition of MRS Companies via its B2B Trust subsidiary and concludes a Mackenzie mutual fund distribution agreement for the Retail and SME Financial Services sector. Moreover, the organization posts notable growth over the last five years, with its balance sheet assets up by 40%, its total revenues by 42%, and net income by 81%. The Bank is also among the Québec and Atlantic region winners of the 2011 Most Admired Corporate Cultures competition.

The Bank posts record net income for the fourth consecutive year totaling $122.9 million, while its earnings per share rise for the sixth year in a row. It also opens its second generation financial services boutique in Québec City and LaSalle, in addition to inaugurating its Laurentian Bank Career Station, a unique and innovative talent recruitment centre permanently located at the Berri-UQÀM subway station. As well, the Bank is named the second most admired banking institution among Québecers for a third consecutive year.

The Bank posts record growth for a third consecutive year, with loans and deposits of close to $5 billion and record net income of $113 million. Furthermore, it obtains an exclusive contract for the operation of ABMs in the Montréal subway system. Today, the organization operates a total of 72 machines throughout the Société de transport de Montréal network. Moreover, in recognition of its contribution to the province’s development, Laurentian Bank is inducted into the Québec Business Hall of Fame by the Québec Federation of Chambers of Commerce.

Management announces its intention to concentrate activities within markets in which the Bank excels and holds a strong position —for direct retail financial services in Québec, and for its other services throughout Canada. The Bank puts its 57 branches in Ontario and Western Canada up for sale.

The Bank acquires all Sun Life Trust Company stock in a transaction that results in the creation of the new B2B Trust subsidiary. Through its LBS subsidiary, the Bank acquires the brokerage firm of Tassé & Associates Limited. The Bank integrates 43 branches in Quebec acquired from Scotiabank.

Subsequent to the withdrawal of its principal shareholder — Desjardins-Laurentian Financial Corporation — the Bank becomes a Schedule 1 institution. This new status allows for easier and freer financing of the institution’s activities through capital stock issues.

The Bank celebrates its 150th Anniversary with assets in excess of $12.5 billion and close to 3,400 employees. The institution launches its LBCDirect telebanking services and acquires the parent corporation of Trust Prêt et Revenu du Canada.

The Bank acquires 30 branches of North American Trust in Ontario and Western Canada. Between 1987 and 1995, Laurentian Bank’s average annual asset growth is in the order of 15.8%.

1980s: Expansion Outside Québec and the Emergence of High Technology

Laurentian Bank moves its Head Office to 1981 McGill College Avenue. After merging with Eaton Trust, the Bank establishes its presence in Toronto, Edmonton, Calgary and Vancouver. Its network encompasses 128 branches (mostly in Québec) and more than 2,000 employees.

The Montreal City and District Savings Bank changes its name to become Laurentian Bank of Canada, of which Laurentian Group Corporation becomes the majority shareholder.

The Bank installs its first Oscar automated banking machine, allowing for a greater range of transactions. The consolidated assets of the organization and its subsidiaries reach close to $5 billion.

The Bank lists its shares on the Toronto Stock Exchange.

Changes in federal banking legislation allow the Savings Bank to enter the commercial loan market and grant loans to companies of up to $100,000.

The Bank opens its first branch outside the Montreal region in Granby.

The Bank installs its Bancaide system, the first generation of automated banking machines

All branches adopt an online system to process savings account transactions, personal loan files and term deposits. As such, the Bank becomes the first financial institution in Canada to link all its branches to a central computer. The Bank inaugurates the Drive-Through banking service, allowing clients to make bank transactions from their car.

A revision of the Bank Act and of the Savings and Credit Unions Act provided the banks the right to determine the interest rate paid and charged, solely regulated by the market. The Bank installs a computer system.

The Bank lists its shares on the Montreal Stock Exchange.

The Quebec Savings Bank Act is sanctioned, allowing the institution to open branches throughout the southern province of Quebec.

As a result of legislative changes adopted by the Government, the bank receives the power to grant personal loans and mortgages.

The Bank becomes the first institution of its kind to hold a trust company with the creation of the Montreal City and District Trustees (later to be known as Laurentian Trust). The organization’s workforce numbers 300, and it operates 25 points of service.

The bank celebrates its 75th anniversary. Its assets amounted to $ 49 million.

The Bank launches an extensive school savings program in collaboration with the Montreal Catholic School Commission.

The Bank celebrates its 50th anniversary with approximately 50,000 depositors and $9.3 million in assets.

Twenty-five years after its creation, the Bank serves 11,000 clients and holds $3 million in deposits. The organization becomes a share capital limited company and is awarded a federal charter. The institution moves to 262 rue Saint-Jacques in Montreal, which remains its Head Office for more than a century.

On May 26, 1846, the Montreal City and District Savings Bank (which was eventually to become Laurentian Bank of Canada) is founded by Monsignor Ignace Bourget, second Bishop of Montreal, and by a group of 15 prominent Montrealers from many linguistic and denominational communities. After its first year of operation, the Banks serves 500 clients with $117,400 in assets. 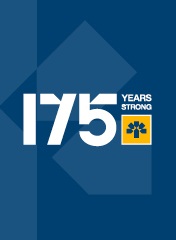